Goa Gajah Temple is one of the oldest temples in Bali with a very distinctive design and has a high historical value.  Instead of being shaped like a temple, actually from the appearance this place is more like a cave.

Goa Gajah Temple is a Cultural Conservation Site building located in Bedulu Village, Blahbatuh District, Gianyar Regency.  This place is quite easy to access because it is on the Denpasar-Tampaksiring-Kintamani route and is still close to tourist attractions in Ubud.  What is the uniqueness of this cave-shaped temple?

This temple building is estimated to have been built in the XI century AD and has been since the reign of the Warmadewa Kingdom dynasty.  The Goa Gajah Cultural Heritage Site Complex has two parts to the north and south which are bordered by a moat.  According to a review of the architecture, the northern complex exhibits Shivaistic signs and the southern one has a Buddhist pattern. 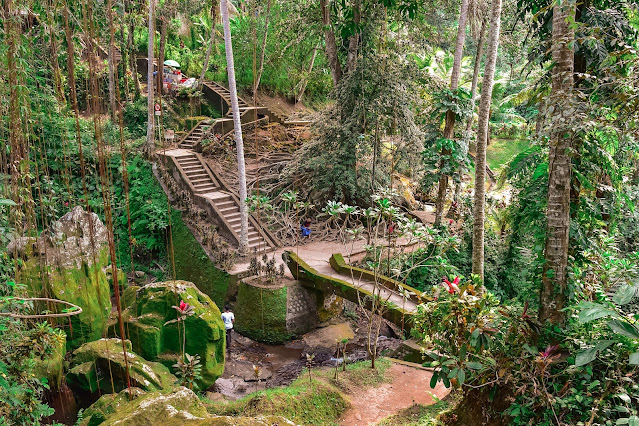 In the past, these two complexes were used by Shiva and Buddhist priests in one period and shows that the two religions can coexist there.  Goa Gajah is also used as a place of meditation by priests, yogis, and kings.

The temple itself is built of solid stone and has a nine-meter long hallway.  The construction of this cave is done by cutting some of the rock cliffs so that the front becomes a flat platform.

Ancient caves in Bali generally take the general form or pattern of houses.  However, Goa Gajah has a protruding front and is carved into a giant relief.  At the entrance of the cave, there is an ornate carving in the form of a kala head and beside it there are decorative leaves, human faces, and forest animals such as pigs and monkeys.

Entering the inside of the cave, you can see the carved kumon and sahy(w)angsa inscriptions.  In Stutterheim's opinion, the typeface dates from the 11th century. 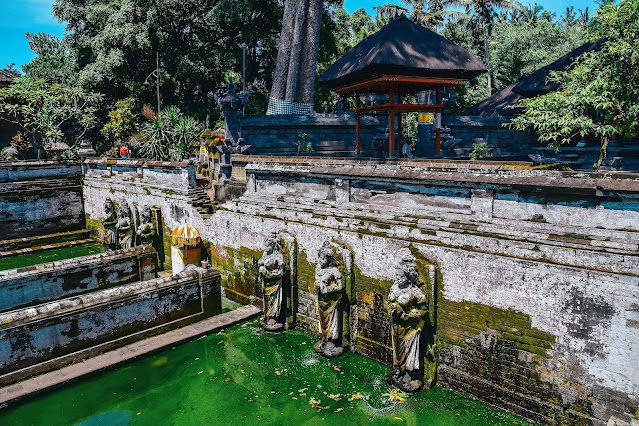 The deeper into the cave, the shape will be wider.  In the hallway there are several large alcoves flanked by other smaller alcoves.  In the largest niche, there are fragments of the Shiva statue and curls of hair.  There are also statues of the Trilingga statue, the Dwarapala statue, the Squat statue, the Hariti statue, and the Ganesha statue.

The single andesite statue of Ganesha in this cave has a height of 107 cm and is depicted sitting cross-legged holding a jug.  This four-handed statue is seen holding broken ivory, a bowl decorated with skulls, aksamala or prayer beads, and in the other hand holding a parasu or an ax.

In the temple area, you can also find the Tukad Pakung Valley Complex.  Archaeological remains in this complex are in the form of building fragments, hermitage niches, reliefs of thirteen stacked umbrellas, reliefs of three-branched stupas, fragments of Buddha statues, and decorative reliefs carved into a number of stone blocks.

The discovery of Goa Gajah Temple was reported in 1923, at that time a high-ranking Dutch East Indies official mentioned the existence of the Ganesha, Trilingga, and Hariti statues.  From this report, Dr.  WF.  Sutterhiem and conducted research in Bali in 1925.

This temple is also recorded in several inscriptions, but no one clearly mentions its name as Goa Gajah Temple.  In the Supplementary Songan Inscription and the Cempaga Inscription, for example, it is called Er Gajah.  Meanwhile, the Pandak Badung inscription mentions this place as Antarakunjarapadda.  In the Negarakertagama book in 1365 AD, the names of Baduga and Lwa Gajah in Bali are listed as Majapahit's territory.

The location of Goa Gajah itself is located in Bedulu Village, Blahbatuh District, Gianyar Regency.  If you are around Denpasar, it never hurts to visit the Cave which is only about 26 Kilometers away.

Those around Kuta can also visit Goa, with an estimated distance of 40 Kilometers from Goa.  Or maybe if you happen to be around Ubud, you will be very happy with Goa tourism because it is only about 5 Kilometers away.

Access for visiting tourists is also not too difficult, because it is on the main route Denpasar-Tampaksiring.  The location of Goa is more precisely in the Petanu river and is a confluence of small rivers in the area with a position on the edge of a ravine.

If you happen to be in Denpasar and intend to use public transportation, you may need to change your vehicle because there is no direct transportation from Denpasar. It would be better if you intend to visit Goa, it is advisable to use a private vehicle for means of travel, such as motorbikes, cars, or others.

Travel time is about 55 minutes to 1 hour if you travel from Denpasar to the Goa location. That is the estimated time if you pass Jl. WR Supratman.

Or if you are in Ubud, it will take about 20 minutes to go to Goa tourism by using private vehicles such as cars, motorbikes, or others. You can pass through Jl. Raya Ubud, and then proceed to Jl. Cok Gede Rai or Jl. Raya Goa Gajah to Bedudu.

If you want to visit Goa Gajah, open start from 07.00 to 16.00 for tourists. However, it is still active for 24 hours, because the location is still functioned by the community as a place of holy worship.

If you want to visit Goa Gajah, now there are eParking facilities that are enabled for tourists. You only need to make a non-cash parking payment using only your cellphone to use this facility.